Get fresh music recommendations delivered to your inbox every Friday.

from My Fingers! My Brain! Records 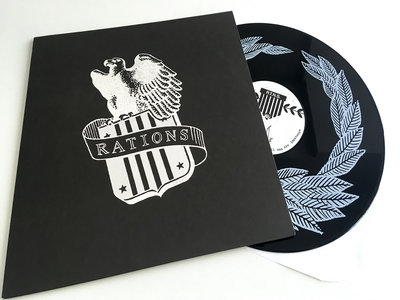 Jerk Store #8
Took a few listens through for this album to fully open up to me, but then everything just clicked, and now I can't stop playing it. First-off, it looks brilliant, the layout reminds me of a Born Against/(Young Pioneers) insert. Musically, the songs kinda hold that early nineties Jawbreaker, Crimpshrine style while still sounding current, like Jonesin' jamming on Latterman or something... loads of bass fills and gang vocals. The songs really vary within that overall boundary, which keeps the album fresh, interesting and very replayable. It's an exciting communal effort that has something to say, and there's at least a dozen people listed as contributors.

Razorcake #60
Fucking great. Sloppy as hell, fuzzed-out, and couched somewhere between (Young) Pioneers and Action Patrol. Frenetic, blistering, quick jabs that, were it a coin toss, consistently land on the ragged, scarred side of pop punk. Made up of a group of thoughtful, experienced thirty-somethings—check out the Rations interview this issue—that seem to be doing it for all the right reasons and having a blast at the same time. Beautiful packaging, careworn melodies, and a seventeen-minute running time. Recommended.

Razorcake #59
I remember back in the early ‘90s when the term “emo” was not the province of pasty crybabies with angular hair and smeared mascara. Band names like Rites Of Spring and Leatherface defined it for me. Pure expression. Nothing held back. Although this disc was recorded in 2010, it feels to me like the bands I heard when I first moved to Victoria. Render Useless, Hudson Mack, Gus, Benchwarmer... I could keep listing rad bands that you’ve probably never heard but Rations really bring out the same feeling that I got in that amazing time and place. Raw and melodic, this disc forced me to feel something! It made the hairs on the back of my neck stand up. That only happens with my favorite bands. One last analogy since I can’t seem to stop myself. Davey Tiltwheel writing songs for Hickey. Best disc this month, hands down!

ships out within 3 days
1 remaining

More merch from My Fingers! My Brain! Records